From the Shop: A New Year’s Resolution.

I’m not big on New Year’s Resolutions.  My usual one is “To not make a New Year’s Resolution.”  (Turns out, it’s easy to keep.)  I’m making one this year though.  It’s a simple one, but I think it’s important, and I’m inviting you to do it too.  In fact, three days into the year, I’ve already achieved it.  This year, I resolve to take more plastic out of the river than I put into it. 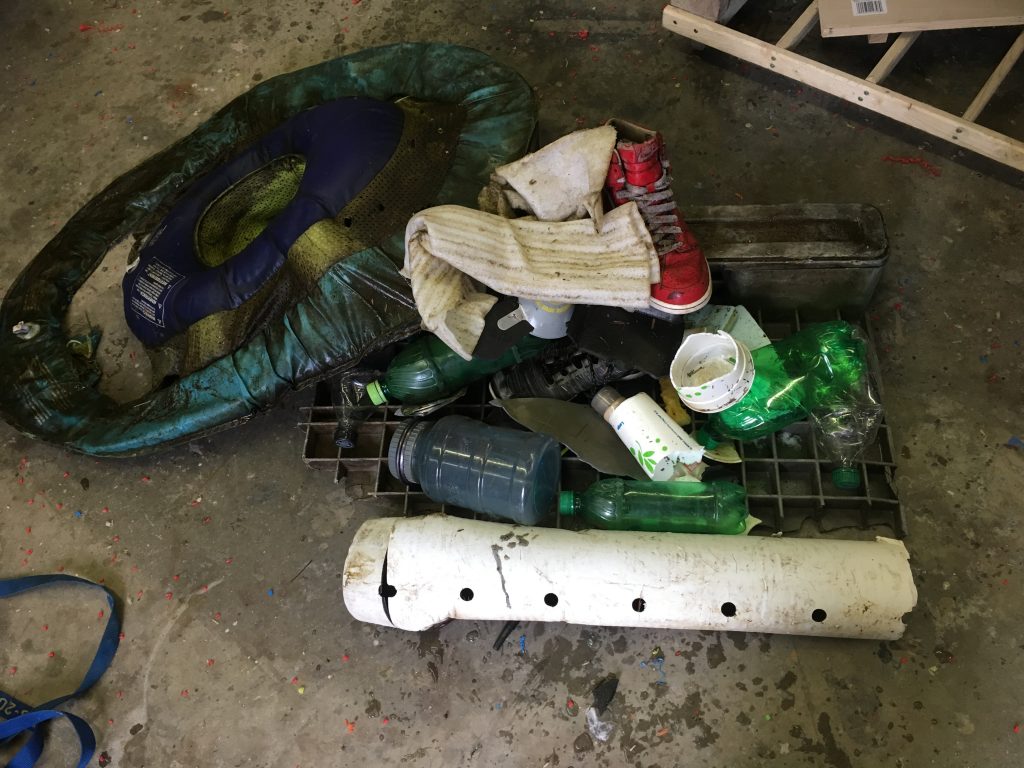 One day’s haul of plastic and other non-biodegradable flotsam.

As paddlers, we like to think of ourselves as stewards of the river and the environment.  And yet, every time we paddle, we leave little tiny bits of plastic behind on the rocks.  Those boofs and rock spins and splats are contributing to microplastic pollution.  Those low water runs are leaving behind tiny traces of plastic that will slow work their way down the river and end up in the ocean.  It turns out I make and market a product, that if “used as directed,”  puts plastic directly into the aquatic ecosystem.  Does that thought bother you?  Because it sure bothers me.  The impact of micro plastic pollution is just beginning to be understood.  How am I supposed to be an advocate for rivers when I’m contributing the the problem and encouraging other people to do the same?

One way would be to stick my head in the sand and say “the impact of whitewater recreation is a minuscule fraction of a percentage of the problem.”  Given that the US contributes about 242 million pounds of plastics to the oceans a year (or approximately the equivalent of 5 million canoes and/or kayaks), it’s actually a reasonable statement.  But that still doesn’t change that fact that we’re still leaving colorful curly-cues of polyethylene behind that will remain in the ecosystem for hundreds or thousands of years.

Since we’re probably not going to change our behavior- those boofs and splats and rock spins and seal launches are too much fun, and the “we thought the river would be higher but we ran it anyway” days aren’t going away, I propose another solution:  Take more plastic out of the river than you put into it.  A net positive for the river.  I started off my effort for the year yesterday, and immediately hit the motherlode:  half of a plastic pallet weighing several pounds (plus several soda bottles, bits of styrofoam, a piece of plastic pipe, two shoes, a change jar, a kid’s floaty toy, etc.)  I’m pretty sure I’ve made up for all my boofs for the year, but I’m going to keep going.

I can’t tell you exactly how much plastic we scrape off our boats on an “average” river trip.  It’s something I’ve wondered about, but I haven’t yet tracked runs and boat weight over the life of a boat to find out. I don’t imagine it’s much, probably less than that soda bottle floating in the eddy.  To be on the safe side, I’m going to shoot for two soda bottles each trip.  And if I’m on a pristine mountain river and can’t find anything, I’ll make it up on a less pristine river another day.  It’s actually a pretty low bar and as i found out yesterday, it’s easy to overachieve- which is great.  It’s easy, and it’s something you might already be doing.  It’s certainly something we should be doing already, but I know I’m guilty of turning a blind eye to trash in the eddy sometimes.

And so, I invite you to come along with me on this quest.  I’m realistic that whitewater paddlers plucking one Mountain Dew bottle at a time from the river isn’t the solution to our plastic pollution problem, but at the same time, I believe that we can have a net positive impact; we can more than offset our negative impact.