From the Shop: Signs and Ski Areas.

I’ve been working on a sign this week on the CNC.  I’ve made a few signs on the CNC, but it’s not something I do a whole lot, mostly because it would be something that would be easy to fall into spending too much time on.  Occasionally a project catches my attention, and in this case, it’s a sign for a local ski area.  But it’s not what you think of when you think of a ski area. 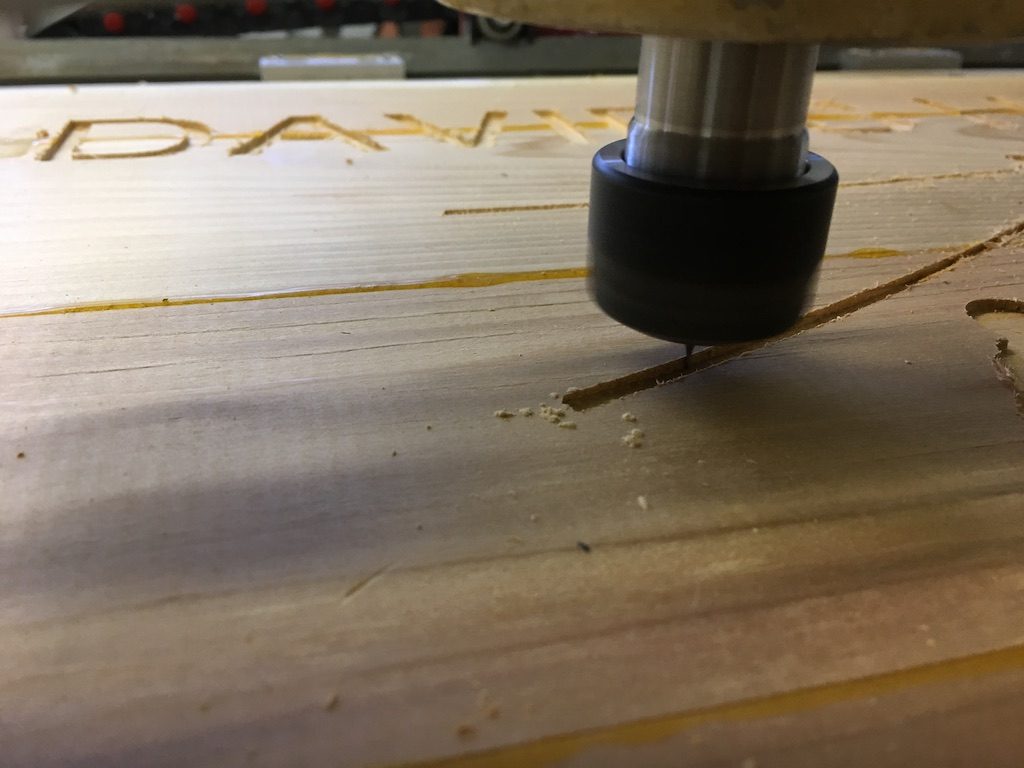 I’ve never really been able to find the passion for skiing that I have for whitewater.  I think a big part of of it is my perception of big ticket prices and lift lines.  Most of the mountains around here are in the range of $80 for a day ticket.  A season pass doesn’t seem like something I’d invest in, not knowing how much I’d use it.  Somehow this winter, my family decided we’d try getting into skiing, and what I’ve found out is dotting the New Hampshire hills, hidden back in remote and unlikely spots, as small community ski areas.  Veterans Memorial Recreation Area in Franklin is one such area.  Run by the Franklin Outing Club, and all volunteers, it’s an anachronism.  Walking into the lodge, it feels like it’s been lost in time since the 70’s.  There’s a rope tow and a T-bar.  There’s no snow making, so you ski on whatever Mother Nature brings.  There are enough working lights on the hill for night skiing on Thursdays, and the City Rec Department brings kids out to the hill.  There are familiar faces every weekend.  The snackbar is reasonable priced.  It’s family focused.  There’s no marketing budget, the money is better spent trying to keep the groomer running.  There’s a room in the basement full of donated ski gear that Outing Club members can borrow for the season, swapping it as the gear is outgrown.  And the cost of a lift ticket?  $20, but that’s on weekends when a local business hasn’t sponsored a free-ski day to cover the operating cost for the day.  Maybe skiing is something I can actually get into.

And so I find myself making a sign to memorialize the contributions of a long time member of the Outing club.  It’s also gotten me wondering how this sort of model could be replicated in the whitewater world?  Whitewater is often criticized as being an expensive sport to get into, but I would say the same about the “retail price” of skiing.  If you walk into a ski shop, buy skis, boots, goggles, a helmet, etc, you’ll be feeling a similar pain in the wallet as if you do the same in a kayak shop.  And then you have to pay again once you get to the mountain.  But ski hills like Veterans virtually eliminate cost as a barrier, while also building a community around the sport.  As someone who began paddling as a teenager, I can appreciate the benefits of being a part of such as community during the “formative years.”  I may be an extreme case but the experiences and relationships I’ve built over the years have put me where I am today.  I count the people who picked me up and took me to the river before I had a drivers license as some of my best influences.  Canoe Clubs used to offer avenue of building this sort of thing, but with the advent of online trip planning and increasing liability concerns, they seem to be facing the same fate as many of the lost rope tow ski hills.  Is it possible to re-focus and build partnerships between Clubs, municipal recreation departments, and local outfitters to help build the next generation of whitewater paddlers?